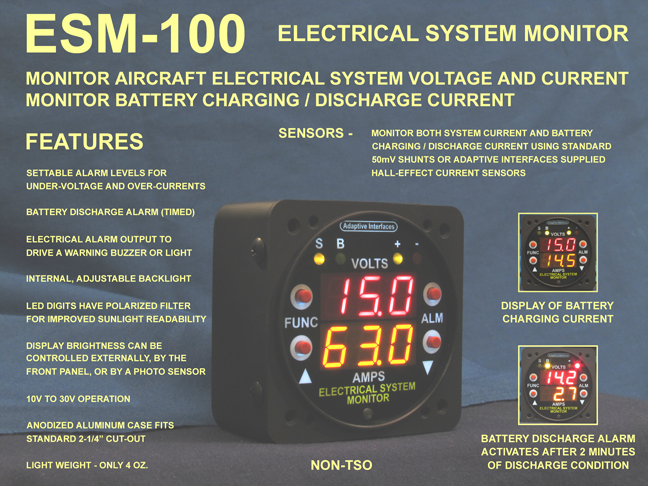 The C1 Power and Control Cable is included with the ESM-100.  For additional cables, including the S1 Sensor Cable for the ESM-100, see the Cables & Sensors   page.

The ESM-100 provides accurate, simultaneous readings of the current draw and voltage of an aircraft's electrical system in a lightweight digital instrument.  The ESM-100 is designed to monitor two separate currents, the battery charging current and the system "Master Switch" current.  Alarm levels can be set for low system voltage and high system and battery charging currents.  The ESM-100 will also show an alarm condition if it senses a battery discharge of more than 2 minutes. The ESM-100 displays information on a large, bright 3-digit over 3-digit LED display. The upper display always shows system voltage and, while the lower display can be switched to show either system or battery charging current, both currents are always being monitored for alarm conditions.

The ESM-100 is designed to use two types of current sensors. The first is a standard 50 mV Shunt, which is placed in the electrical circuit to be measured.  The second is a solid-state Hall Effect sensor, supplied by Adaptive Interfaces, that is placed around the wire to be measured.  For more details, see the Cables & Sensors page.

Like all Adaptive Interfaces instruments, the ESM-100 has a built-in white LED backlight for low-light and nighttime operation.

Most ammeters monitor only a single current, which makes it possible to overlook an electrical system problem that may occur in the branch that isn’t being monitored.  A good example is a failure of the alternator charging circuit which often goes unnoticed until the battery voltage drops to a point where problems start to get a pilot's attention.  That is usually too late, especially if you have an electronic ignition.

If you already have an all-in-one monitor, you may feel that there's no need to monitor your electrical system.  However many all-in-one monitors will shut off when the battery voltage drops slightly below 12 volts.  If that happens and you have no backup electrical system monitor, you may unknowingly be losing your battery capacity, which could result in a forced landing.  The ESM-100 will continue to operate down to 10 volts and thus let you know why other electrical instruments may no longer working.  Since the ESM-100 will alert you immediately to a charging problem, you'll save precious minutes to find an airport while operating from battery power alone.

The ESM-100 is a solid state instrument that displays aircraft electrical system voltage and either electrical sytem current or battery charging current on a 3-digit over 3-digit display.  The ESM-100 is powered directly from the aircraft electrical system and measures its own supply voltage to provide a display of the system voltage.  The ESM-100 also monitors and displays current from two sources, either the electrical system current (normally measured from the Master Switch) or the battery charging current (measured between the alternator and the battery.  For each current measurement, either system or battery, the ESM-100 can use either a standard 50 mV current shunt or a solid state, Hall Effect current sensor.  Voltages and currents are measured by analog-to-digital converters (ADCs) within the ESM-100's microcontroler.

The MCE-100 is has an aluminum case and fits a standard 2-1/4 inch round panel cut-out.  It is controlled by a set of 4 buttons on the front panel and by a set of menus and functions.