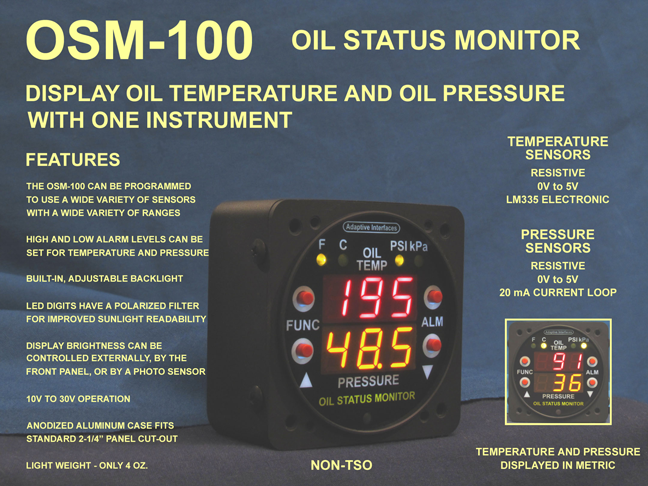 The C1 Power and Control Cable is included with the OSM-100.  For additional cables, including the O1 Sensor Cable for the OSM-100, see the Cables   page.

The OSM-100 comes in a lightweight (4 Oz.) aluminum package.  Because of its dual display and function, it can enconomize panel space by replacing functions that are often done with two separtate gauges.

The digital LED displays of the OSM-100 have special, polarizing filters to greatly improve their readability in bright sunlight.  Like all Adaptive Interfaces instruments, the OSM-100 has a built-in white LED backlight for low-light and nighttime operation.

The oil is your plane's lifeblood, and a system that monitors it continuously alerts you immediately to any pressure drops or temperature rises beyond normal is a great way to give you peace of mind.  Oil is an easy parameter to overlook, especially as your attention is focused outside looking for traffic.  You don't want to find out that you had an oil leak that started 5 minutes ago, as your engine seizes to a halt.  By keeping tabs on both the oil's pressure and temperature and notifying you within seconds of a problem, you can focus more of your attention on flying the airplane knowing that the gauge is monitoring itself and ready to alert you to any anomalies.

The OSM-100 is has an aluminum case and fits a standard 2-1/4 inch round panel cut-out.  It is controlled by a set of 4 buttons on the front panel and by a set of menus and functions.